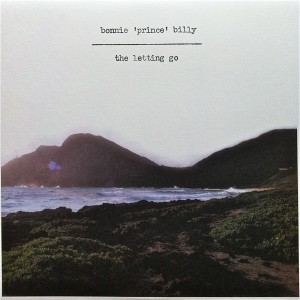 In 2006 I went to see Bonnie ‘Prince’ Billy perform his ‘super wolf’ album at The Forum in London with my boyfriend, now husband, Ben. I was utterly blown away and in a very naive moment i emailed him through his website to say how amazing i thought he was. From there we have continued our correspondence which has led to few collaborations that are very dear to me.

‘Becky sent me an image once that I connected with immediately. My little childish sprout had grown and hit puberty and done the dark things of young adulthood, all in the recesses of my consciousness ignored by the world certainly; and here the sprout stepped forward and said “There, that’s mine, I’ve Been waiting for that.. bye!” and took off. Because there it was, this color and this safe familiarity wove with something a little fearsome.

With the simplicity and threat of Cuban propaganda billboards made rough through steeping…maybe like if you ripped a billboard down and folded it up into your pocket and carried it, treasured, for months or years…then it would get soft and creased and look like these. And to the fine and definite blots of beetroot-juice and stained leather are added as ornament.

After some correspondence and distant commission-collaboration I met Becky in appropriate hyper-reality. We were walking in opposite directions on a road near the water in Glenuig, in the Parish of Moidart in Scotland. I knew she would be coming there, but I did not know exactly when; and I did not know that I would meet her randomly on foot. But I knew from some distance that it was Becky Blair approaching me, because she was, in being, something like what she presents in work. Being an alien myself, I can spot these other visitors from a mile off.

I am grateful for her work. This current group of works again shows a world I know and miss; the paintings depict a present of colorful shadow that is disturbingly absent from the detail of my physical vision. Sometimes I want what I see to go away, leaving what it is I KNOW I see remaining. But that never happens. Physical reality remains, confusingly, physical reality. At least with Blair’s work there is a touchstone that says I am not crazy or at least not alone.’ Will Oldham